Join us for Online Service at 8am, 10am or 12pm online, Facebook Live, and Youtube Live. We WILL NOT open our building for public gatherings this week. All of our lives have been incredibly impacted by the recent events related to COVID-19. We believe that in times of crisis, we need a strong church. Even as we make adjustments in this current season, we are praying peace in our nation and world! Join Pastor Carter March 14th-April 12th for prayer at 6:30am on FB and IG Live @mrbryanlcarter CLICK HERE

People growing people by connecting them to their next step with Christ. We do this through worshipping together, meeting in small groups, and serving in volunteer roles.

At Concord, you’ll hear it often: We grow people. It’s our way of saying that people grow, strengthen, and encourage other people by connecting them to their next steps with Christ. For us, being a part of Concord means having a boldness for Christ, a passion for people, being a catalyst for change, and always hungry for more. We do this through worshipping together, building relationships in Grow Groups, and serving both the needs of the church and our community.

Meet Our Pastor    Our History

OUR LEADERS AND STAFF 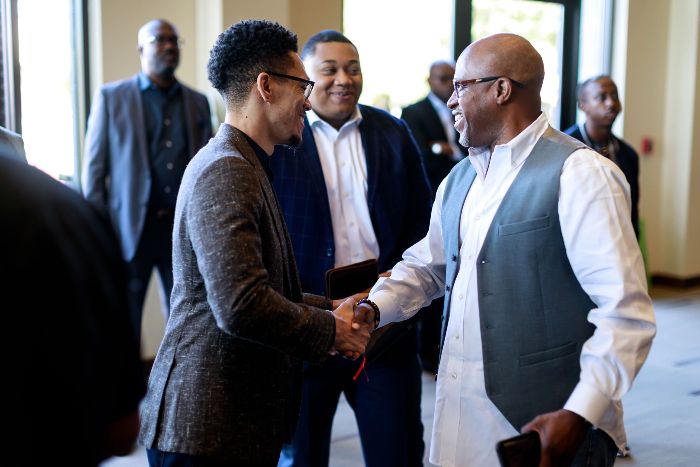 We have a dedicated team of elders and staff members that are passionate about serving and caring for the Body of Christ. The elders at Concord Church:

The Bible consists of the 66 books of the Old and New Testaments, is the inspired word of God, and is truthful in all that it affirms. It is the final authority for Christian faith and practice. (2 Timothy 3:15-17, 2 Peter 1:19-21)

There is one true God who eternally exists as three persons: The Father, The Son, and The Holy Spirit. Distinct in relationship, the three persons of the Trinity are fully God and are one in essence and purpose. God has revealed Himself to be the infinite personal Creator, who is sovereign over all things. (Genesis 1:26, Deuteronomy 6:4, Mark 1:9-11)

Concord Church began at the Carr P. Collins chapel on the campus of Bishop College. The name Concord is synonymous with harmony, peace, and unity. Our founding pastor, the late Dr. E. K. Bailey had a vision for a church that would change the lives of people and have a positive impact on the community.

On Sunday, June 22, 1975, two hundred and thirty “charter members” joined him in this vision and Concord was born.

For nearly three decades, Pastor Bailey invested in the lives of people and built the Concord Church to become one of the leading churches in the country before he graduated to glory.  Throughout our history, Concord has always been a church with a vibrant membership dedicated to excellence in ministry. We are a church that possesses an active faith in God and obedience to His will.

After its launch in June 1975, Concord quickly became one of the fastest growing churches in America.  We experienced great success in evangelism and discipleship. Six months after being established, we purchased our first property at 3410 South Polk Street in Dallas, TX.  We hosted an outreach revival called “Joy Explosion” and in one week we watched God move 1,000 people to accept Christ! We began an important emphasis on discipling men and women in Christian ministry. Our focus on ministry and community service led to the development of the Institute of Church Growth and Development to assist other churches in furthering their ministry. Additionally, Concord became one of the first churches in the country to introduce staffing to the African American church community.

During the 1980s, we experienced growing pains and had to make adjustments in order to develop the infrastructure to support the growth of the church.  The Lord sustained us during this period and His grace was sufficient as the Concord Center for Biblical Studies (CCBS), and the Substance Abuse and Women's Ministries were launched.

In the early 1990s, God moved us to higher ground as He matured our leadership.  Pastor Bailey established a Council of Elders to partner with him in leading the church forward.  We were able to burn the mortgage notes on three different properties and make other purchasing decisions to prepare for expanding Concord’s reach in the journey ahead.  We spent 22 years at the Polk Street location! In December of 1997, God led us to purchase a 24-acre site located at 6808 Boulder Drive (now Pastor Bailey Drive). This site would provide us with the space necessary to expand our ministries. The CMBC Learning Center and the Concord Senior Center were both launched in 1999.

As we moved into the 21st century, we made great strides in fulfilling the purposes of God.  We began to develop annual church themes during this season of ministry.  The theme for 1999 was “Saved to Serve.”  In 2000, the theme was “Share the Joy” and we shared Christ with more than 10,000 people.  From 2001 – 2003, the theme was “Reclaiming the Village.”  We also began our annual financial commitment to our students by establishing a scholarship program in the amount of $100,000.  During this season, we witnessed Pastor Bailey's valiant fight with cancer, as we prayed and continued to grow through his health challenges. Continuing the emphasis on discipleship, Pastor Bailey prayerfully selected his successor in August 2002 and began grooming him to take Concord to the next level.  After twenty-eight years of invaluable service, Pastor Bailey went to be with the Lord in October of 2003.

Succeeding Pastor Bailey was Reverend Bryan L. Carter, who assumed the position of Senior Pastor. Pastor Carter had previously served on the church staff as Associate Pastor of Discipleship and then as Assistant Pastor beginning in 2000.  Under Pastor Carter’s leadership, God has continued to bless our church immensely.  Pastor Carter immediately led a renewed focus on Concord’s mission of being “A Church That Makes a Difference.”  We strengthened our foundation by annually concentrating on one of these five pillars: membership, maturity, missions, ministry and magnification.  Concord once again became one of the fastest-growing churches in the country.  From 2008-2010, we went from two worship services to four worship services, adding one in each of the latter years.